Within the ATC Air Cadets are encouraged to take part in a wide range of sports and build upon their fitness.  Team Sports are undertaken from purely fun games to National representation, so no matter what your abilities there will be something you can take part in and enjoy.  At Squadron and Wing level there are many other physical activities pursued but at Regional and National level there are seven main sports that are undertaken. These are Athletics, Cross Country, Football, Hockey, Netball, Rugby and Swimming with various categories re age and gender.

Those cadets wishing to take part in these activities will need a North Region Consent Form, this is available to download here

These are initially inter Squadron competitions, held at Wing level and are normally held in Summer.

All age groups can participate and can progress to Inter Wing, Inter Region and Corps level.

The Events participated in athletics are as follows:

This sport is normally played in the late autumn time of the year. Competitors can compete at all levels of this sport.  The following events are participated in:-

Cross Country is normally the very last sport in the year for most Wings and is competed at by Junior and Senior Girls, and Junior, Youth and Senior Boys.  The courses are normally in-between a mile and a half to three miles, the sport is competed at all levels, right up to Corps. 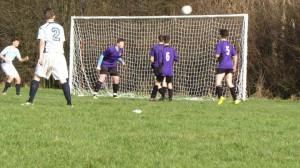 Wings within the Region operate tournaments between their Squadrons, which allow the best players to be selected to represent the Wing. The same applies to the Region, with Wings competing against each other and the best players being able to make up the Regional team and so on up to Corps level, where Cadets can compete against other Cadet Services and other external teams – sometimes to International level.

Rugby is played by male cadets within the Air Cadets, it is played to Corps.  at Seniors level and Region at Junior level.

Games are normally played in late autumn to early winter, with the Corps games being in the early new year.  All games are played under the rules of the Rugby Football Union.

Hockey in the Air Cadets is played by female cadets, and can be competed at right up to Corps level.   Wings host Inter Squadron tournaments where the Cadets for the Wing, Region and Corps teams will be selected.  The Hockey Tournaments are normally held late in the year and are governed by the rules of the Hockey Association.

Netball within the Air Cadets is played by female cadets, and is played in the early part of the year where players can progress all the way through to Corps level.  The competition at Squadron level is normally open age group, but once at Wing level and beyond, it is split into Junior and Senior girls. The sport is played under the rules of the All England Netball Association.